An Atlanta couple breathe new life into an antebellum cottage, and nestle their restored sanctuary within old bones 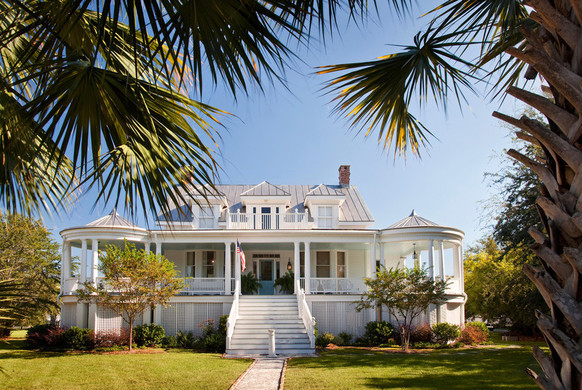 The raised, stark white home on Sullivan’s Island is a survivor, at once a testament to history and the present-day.

Construction began in 1850, resumed after the Civil War, and finished in 1870. Today, Atlanta couple David Russell and Jamie Brownlee own the property, which enjoys a spot on the National Register of Historic Places. The five-bedroom, five-bathroom home maintains classic appeal; the wraparound porch flanked by twin cupolas creates a striking facade. But only though restoration could the 1102 Middle Street home eclipse its past.

Much of it was conducted out of necessity. The property sits in a low-lying area, meaning that the house was actually sinking. Water had migrated into the home's ground level, which if left unchecked, would have created a volatile foundation. But then, too, livability remained a concern.

To bring the home into the contemporary, the couple turned to Steve Herlong’s architecture firm, Herlong & Associates. The home’s return, in part, to its original aim has made it just that—an original. “There are so many big, gorgeous homes here that aren’t in character with the island,” Brownlee says. “We wanted to keep the beach cottage as it was intended to be.”

Russell has ties to the Lowcountry. He graduated from St. Andrews Parish High School in West Ashley prior to attending Davidson College. His parents stuck around for another three years and then moved to east Tennessee. Russell has been returning his whole life. “This place is really our sanctuary,” he says. “It’s where we escape Atlanta to find some peace that we can’t attain as easily down there.”

Russell bought the Sullivan’s Island property in 1985 when it was little more than a shell. The home was a series of small, dark rooms without central air or a kitchen. Worse, it was colored in dark green jungle wallpaper. “It was in really bad shape,” Russell says.

He married Brownlee a few years later and now the couple have two children: David, 19, and Kelley, 17. Russell works as a lawyer specializing in securities litigation, while Brownlee, a former lawyer herself, works as a community volunteer and part-time arbitrator. The family visits Sullivan’s year round, spending five or six weeks there in the summer. They’ll come in the fall during Thanksgiving, perhaps returning between Christmas and New Year’s. “We’ll build a fire, roast some oysters, hang out at Poe’s,” Russell says.

The house underwent piecemeal work for a number of years. A wall was knocked out to add a kitchen. Central air was introduced. But it was Brownlee who insisted on a more substantial transformation. “So it would be livable and comfortable year round,” she says.

The couple approached Herlong, whose firm has offices on Sullivan’s Island and Isle of Palms. Much of his company’s work, in fact, involves island dwellings, including properties on Daniel Island and Kiawah Island. Tailored for the waterfront, the homes emphasize views of the ocean, marsh and coastal areas.

A Saluda native, Herlong set out for Charleston after graduating from Clemson University in 1979. He joined a commercial architecture firm before heading up a design-build firm focusing on custom homes. He founded Herlong & Associates roughly 20 years ago, on the heels of a three-year sailing expedition with wife Susan aboard their 37-foot, cutter-rigged sailboat. The experience left him with a better appreciation for nature, and the way it affects design.

In Herlong’s efforts, he tries to stay true to the home’s character and structure—precisely what Russell and Brownlee sought. “We really were very careful to recreate the historic texture of the structure, the architecture, and the finish,” Herlong says. “We researched everything very carefully to make sure we did everything in the proper historic context.”

It was important. Brownlee and Russell needed consent on the renovations from the Town of Sullivan's Island Design Review Board. The home was also named to the state’s National Register of Historic Places prior to start of the work. Which—naturally—meant more paperwork and cajoling to obtain the necessary variance approvals. “It wasn’t difficult,” Russell remembers. “It was just time-consuming.”

The town’s review board “loved” the changes, says Brownlee, though the process took about five months. Reconstruction, stabilization and redesign required 10 more months, finishing up in 2009. Though now, the delays seemed small. The past has been re-imagined, the home’s future set.

The couple insisted upon reclaimed materials, choosing to salvage what they could. They enclosed a portion of the home’s wraparound porch, reusing the porch columns inside the home. The home’s heart pine beams became the fireplace mantel, and the old bricks helped form the fireplace. The kitchen island is also made from heart pine wood, and the countertops show off a tabby finish made with crushed oyster shells. Herlong even re-milled floor joist to resemble the structure’s original floor joist. “Steve was very creative, very thoughtful,” Russell says. “He could have easily said you need to turn this into the next greatest thing in the Lowcountry, but when we told him what we wanted, he not only respected it but he agreed with it.”

Post renovations, the front porch likely remains the home’s most exciting feature, ringed by several columns and the round corners. “It’s original to the home,” Herlong says. “We wanted in every way to preserve the front façade.” It’s Brownlee’s favorite part of the house. “There’s no better place on Earth than the front porch, whether it’s lying in the hammock, reading a book or taking a nap.”

Unless you count the kitchen, an airy expanse driven by light. Herlong opened up the house, expanding on the rear side to create more room. Now the kitchen contains a wall of windows, remarkable seeing that many kitchens require extra wall space. At the same time, the extension let Russell and Brownlee add more parking in the garage area. The basement—previously neglected—also was transformed into an additional living space. Plus, the big, wood-burning fireplace makes the house much more comfortable and inviting come wintertime.

Theresa Bishopp coordinated much of the interior work, crafting a handsome, clean aesthetic that lays bare the beauty of the home. Herlong & Associates maintains an inclusive approach to renovation, offering interior architecture design and consultations. “That was one of the most wonderful things about the firm—having the same group of people involved from the very beginning to end,” Brownlee says.

Once more, the approach speaks to the home’s integrity, maintained amid modernization. “We only gave the house a floor plan,” Herlong says, “that better fits the way we live today.”