Be the first to see the azaleas that thousands of visitors will enjoy this season. Three local gardens invite you to come on in. 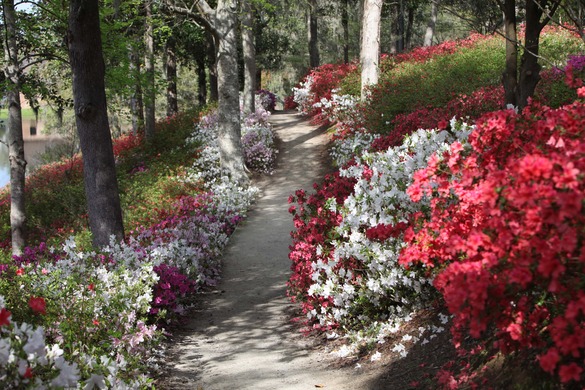 Magnolia Plantation and Gardens enjoys a crowning honor: Number 1. Indeed, the estate possesses a double distinction as America’s oldestgarden and as the first in the nation to successfully plant azaleas outdoors.

It’s quite the legacy to uphold, acknowledges Tom Johnson, director of gardens at Magnolia. The garden first opened to the public in 1870, the same year in which European publications listed three American sites as “must-see” destinations: Niagara Falls, the Grand Canyon and Magnolia Gardens.

As part of his job, Johnson must restore Magnolia Gardens to its 19th century heyday. One catch: Johnson cannot rightfully return the garden to the glories of 1870 by planting 1970 varietiesof azaleas and camellias.So Johnson settled on a solution.“We’re traveling the world right now looking for the oldest varieties we canfind,” he says.

In September, the group visited France, discovering 100 varieties of pre-1900 camellias, 50 of which are new to the United States. Miles Beach, the director of the Camellia Collection of Magnolia Gardens, recently visited England in search of heritage camellias. This fall, Johnson departs for Belgium to look for older “Belgium Indian” azaleas.

Johnson also helped form South Carolina’s first chapter of the Azalea Society of America, named in honor of the Rev. John Drayton. The group meets on the fourth Monday of each month at Magnolia Gardens, where they share techniques and listen to guest speakers.

When Drayton assumed control of Magnolia in the1830s, he changed the design of the gardens from the more formal French variety to the Romantic style seen today. The gardens were first established in 1685 aspart of the dowry given to Thomas Drayton on behalf of his wife’s father, Stephen Fox. It was a magnanimous present: the entire Magnolia estate.

The European “Romantic” or “Picturesque” themes involve an intertwining narrative of man and nature. “You can do two things in garden design,” Johnson says. “A formal garden, which controls nature, or a Romantic garden, where man attempts to recreate Eden by putting man, nature and God in harmony together.”

The acreage, set with camellias, roses, hibiscus and lilies help round out the collection. In fact, Magnolia recently was named an International Camellia Garden of Excellence, joining a select group of 30 gardens around the world, only five of which are in the United States.

Yet, it is the azalea collection that remains unequaled, Johnson says, as the garden intends to acquire the most comprehensive collection of azaleas in the nation.Visitors return each year to Magnolia to walk the gravel and sandy pathways,breathe in the scented flowers, and spy their reflections alongside the azaleas in the garden lakes. It’s a triumph of ancient times and a triumph still today.

Peter and Linda Shelbourne, proprietors of the historic Linwood Bed & Breakfast in Summerville SC, describe themselves as “extreme gardeners.”

It speaks to an exhausting joy nurtured by the couple, who purchased the property in 1979. They rediscover it every day at Linwood, which is swollen with magnolias, pines, hickories, palms, live oaks,roses, hydrangeas, and of course, azaleas.

Julia Drayton Hastie built the Victorian home, framed by columned and elevated front and rear porches, in 1883. Julia’s father, the Rev. John Grimke, lived the later years of his life at Linwood, as the two conceived the initial landscape design of the 2-acre historic site, which rests five blocks from the center of Summerville.

The front porch overlooks the formal azalea-lined, sandy pathways, which form a demilune from the street to the house. Century-old pines and magnolias tower above the Formosa azaleas and pink-lavender camellias. The festooning Carolina Jessamine, purple wisteria, and White Dogwood flowers help complete the vista.

Today, she and her husband still cast an eye toward timeless dangers, like root rot:the azalea gardener’s number one adversary. The fear of which frightens Shelbourne to the point of blood curdling, she jokes. Though perhaps not entirely.

Infected plants or soils new into the landscape can introduce the causal fungus. Once established in the soil, it’s nearly impossible to eradicate. Symptoms include yellowing and wilting leaves, leaf drop, and death of individual branches.Infected roots additionally appear water-soaked or blackened, while the crownwood may reveal brown discoloration near the soil line once the tissue is cutaway.

“Prevention is the only way to successfully manage azalea root rot,” says Randy Rowe, a plant pathologist, professoremeritus at Ohio State University, and a recent Linwood Bed and Breakfast guest. “The first defense is to purchase only high-quality, disease-free plantsfrom the nursery.”

Azaleas should not be placed in locationswhere other azaleas have perished because of root rot. Be mindful, the fungusis already present in the soil. Also plant only in well-drained, well-aeratedsoil and avoid areas where water may stand, another favorable condition forroot rot.

And don’tbe fooled by size, Shelbourne says. “One does not need to buy enormous plants.Small azaleas in raised, well-shaped beds can look very attractive,” sherelates. “The fact that most in our area are evergreen makes landscape designless laborious. Flowering branches that still have lots of buds to open can make wonderful, long-lasting additions to floral arrangements inside thehouse.”

Generally, and incumbent upon Mother Nature, the time between mid-March and mid-April represents the optimal seasonfor azaleas in the Lowcountry. “That’s when they look most spectacular,” SidneyFrazier says. “But of course, that can change with the weather.”

He should know. As the vice president of horticulture at Middleton Place Gardens, Frazier keepswatch over America’s oldest landscaped gardens, just as he has for three-plus decades.

Cultivation involves year-round planning, as petal blight remains a chief concern. “It’s afungus that can wipe you out,” Frazier says. “It only attacks the flowers itself. If that occurs, we have to put out a fungicide so that it iscontrolled.”

Then immediately following azalea season, Frazier’s team of 8 to 10 full-timegardeners begin preparing for the next year. “We prune, fray and fertilize,checking to make sure we don’t have leaves that linger around becoming aproblem.”

The second Henry Middleton introduced the garden’s azaleas in the antebellum period, roughly 100 years after the plantation was started in 1741, Frazier says. His vision was extraordinary; the azaleas – the hillside at Middleton contains 40,000-50,000 bulbs alone – maintain magical drawing power.  “What I hear people comment about the most isthe mass planting we have. I think that is something that is very impressive tothem,” Frazier says. “You have to remember. Azaleas are extremely popular notonly to our local Charlestonians, but to people from all over the world likeGermany, China and Italy. They’re very popular in those countries.”

Frazier recommends a soil test, which typically costs $5 per sample from the Clemson Extension office. Soil testing allows home owners to determine the amount of nutrients or fertilizer needed to maintain a healthy lawn and garden. “When youhave a soil test, you’ll want to tell the agency what crop you plan ongrowing,” Frazier says. “They’ll know the type of soil acidity the azaleasrequire, so they can tell you what needs to be added to the particular soil atthat location.”

Also,Frazier cautions, azaleas love shade. “They do not like full sun. If you have alocation in your yard where you have pine trees, magnolia trees or live oaktrees, those are excellent places to plant your azaleas,” he says.

Don’t plant the flowers too deeply, either. “That’s a big mistake a lot of homeownersmake,” Frazier says. “Azaleas are shallow-rooted plants that cannot tolerate being planted deeply.”

Frazier maintains a home garden suggestive of Middleton Place, flush with shrubbery, azaleas, camellias, tea olives and roses. “They all have that Southern charm,”he says. And – perhaps surprisingly – azalea season may not represent Frazier’sfavorite time of the year.  “I love themonths when there aren’t a lot of plants in bloom. You can really see the bonesof the garden. You can see the makeup,” Frazier says. “You can truly enjoy theflowers. But to be able to see the bones of the garden – the foundation that supports those plants – that really means something.”