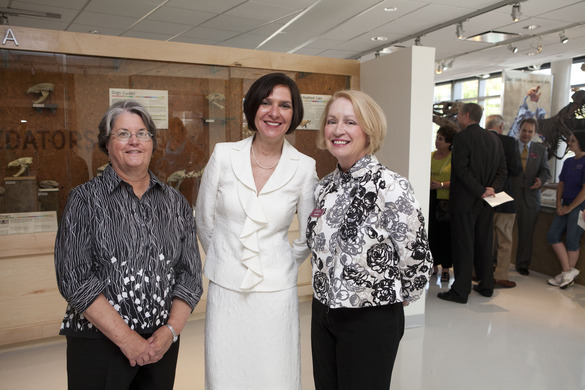 As a graduatestudent at the College of Charleston, I parked my car in the evenings in abeat-up parking lot known as “K Lot.” You can imagine my surprise when, just afew years later, K Lot had completely disappeared and the snazzy new sciencebuilding had taken its place.

As Charleston grows as a city, theCollege of Charleston is growing rapidly right along with it, andaccommodations for students’ learning, housing, and intellectual growth aremore important than ever. Monica Scott, the Vice President for FacilitiesPlanning, knows about the delicate balance that must be struck between the two.As a former planner for the City of Charleston, her background has made hermore sensitive to the job she now holds at the College.

“When I first moved to Charleston, Iworked in the City Planning office,” she explains. “Before that, I earned anundergraduate degree in Politics from Penn State, near the town where I grewup. But I found out that law school, which was my original plan, wasn’t what Iwanted after all. So I sought a graduate degree in urban planning.”

“Imagine my joy when I got the jobat the City of Charleston after discussing Charleston in my Masters thesis,”she says with a smile. “It was a real dream come true.”

“Working at the City was a greatpredecessor for working with the College,” she says. “Everything we do now atthe College affects the City.  I ammindful of that, having been on the other side.”

“I understand the importance ofkeeping Charleston’s most historic buildings preserved properly,” she says. “Agood bit of my job is to scout out property for the College and to oversee newconstruction. But when it comes to new construction, I’m often limited byfactors like height, mass, even the style of the building, because of the needto preserve Charleston’s historic character.”

And trust me, Scott is not workingwith small potatoes. In fact, she says it’s estimated that the College ofCharleston will need an additional 900,000 gross square feet by the year 2020!

“My focus has to be broad,” shesays. “I have to keep my eye on the bigger picture. I have to think aboutwhat’s best for us long-term.”

Things are currently busy at theCollege, if you couldn’t tell by the abundance of construction taking placearound the campus.

“We’ve got a lot going on all thetime,” Scott laughs. “Right now we’re finishing up with the new sciencebuilding. Chemistry is already there, but we need to complete the Geologydepartment. We’re also systematically renovating a lot of older houses,bringing them up to snuff for the College to use them, but definitely keepingtheir beauty in tact.”

One of the most recent, and mostexciting developments in the College of Charleston world is the preparation ofDixie Plantation, a resource out in Hollywood, SC, that was given to theCollege in 1995 by a local artist named John Henry Dick. The College has someambitious plans for the area and its surrounding ecosystems, according toScott.

“It’s such a gorgeous place,” shegushes—if you can imagine a woman of her stature gushing. “We’ve finished a 4.3mile walking trail, handicapped accessible as well, that takes you throughforests and rivers. The trail even has signs that explain to visitors the layof the land and the culture of the physical environment.

“We’re also renovating John HenryDick’s own art studio. He was a painter, and his art studio is situated on theplantation. The plan is to put an exhibit in the studio, celebrating the lifeof John Henry Dick, his contribution to the school, as well as his artwork.”

“The plantation is very protected,and we’ll strive to keep it that way,” says Scott. “It’s such a generousallotment of land, it’s not overwhelming to envision these ideas taking shape.”

Besides the plantation, Scott saysthat the College of Charleston will soon have more of a presence inneighborhood communities other than downtown Charleston.

“We’re going to have a new marinebiology building on James Island, for example,” she says.  “And 20 years out, the College willdefinitely have a presence in other places, even the North area. We haveenormous space needs right now on the main campus. To be honest, our goal is tokeep undergraduate enrollments stable at the moment—we don’t have the room fora constantly growing freshman population. But we do anticipate more graduatestudents, especially studying off campus.”

Like most enterprises in downtownCharleston, parking is often a challenge for students at the College, but Scottseems optimistic that the city will remedy that issue soon.

“Parking is always a problem, andyou don’t want to encourage too many cars,” she says. “My own opinion is thatwe’re moving towards a public transportation system for the future. As far asCollege of Charleston students, we try to accommodate their needs to commute asmuch as possible. Right now you can ride the CARTA buses free with an I.D.card.”

Scott says her favorite part of herposition is the chance to work with different people all the time on theimportant projects at stake.

“What I experience is so diverseevery day,” she says. “The city, the faculty, the preservation groups, the homeowner associations—I have to interact with all of them about our visions.”

Being an avidpeople-person, Scott also volunteers a great deal in her spare time, as a boardmember of the Lowcountry Food Bank as well as a board member of Women WithWings, an awareness group for ovarian cancer.

“I help with alot of our fundraisers,” she says.

As for her down time, Scott says sheenjoys cooking, traveling—she’s planning a river cruise this summer from Pragueto Budapest—and taking long walks around the city.

“After all these years, I’m stillamazed at the beauty of Charleston,” she confesses. “I love how the city isalive 24/7—and with such diverse crowds.”