Home remodeling is something we all consider at some point, and for these three kitchen and bath makeovers the end result is truly astonishing 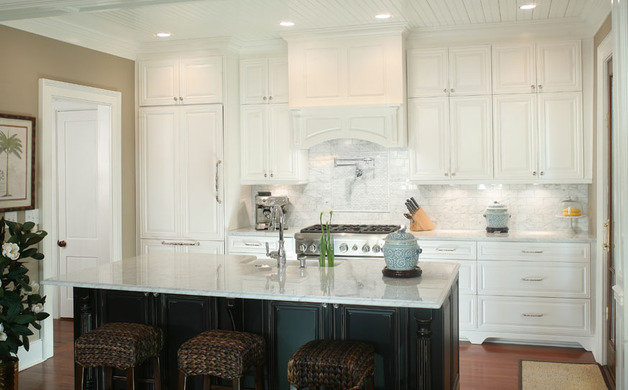 No one would ever insult a home in the Old Village of Mount Pleasant. Even houses that beg for slightly updated changes retain their sense of dignity and tradition.

One such house, recently renovated by Jilco Kitchen and Bath, is the abode of Gina and Sean McKinless. Designer Savannah Classen called the project "her biggest and most challenging to date," but the McKinless family seems more than pleased with the results.

Gina McKinless, who hails from Nashville, Tenn., and wanted to move to Charleston after visiting the area for years, was kind enough to show me around her home. The Jilco team, including Classen, worked on the kitchen as well as the upstairs bathrooms and the laundry room. Contractor Sam Lisi of Village Restoration  initially introduced the couple to Jilco's services.

As it turned out, selecting Jilco as a team and Classen as the designer was a compliment to the company's precision. McKinless explained to me how she wanted to work with her home's natural walls—not add to or compromise the structure.

"It was important to us to stay in the footprint of the home," she explained.

Another crucial point for the family kitchen was ample cooking space, which the new kitchen achieves. McKinless emphasized how she enjoys cooking and "socializing while cooking."

"We wanted to utilize every inch of space," noted Classen. "We also wanted a view of the waterfront out the front windows of the home."

The laundry and bathrooms in the McKinless household likewise benefitted from the Jilco touch. New cabinets were installed in all three rooms, providing plenty of storage.

"The house was older and thus lacked the amount of storage we needed," McKinless pointed out.

In addition, Jilco updated the vanities and the showers in each bathroom and added marble countertops to the laundry area.

"We deal with anything regarding countertops and cabinets," said Classen. "We provide all the hardware and do the installation ourselves. It was tricky in this case—but I love the challenge of getting it exactly the way someone wants."

The McKinless family purchased the home in December 2012 and began working with Classen in January 2013. The couple did not move in until the end of September, when renovations were completed. Of course, plenty of meetings took place between the Jilco team and the homeowners during those nine months—from the moment the contractor introduced everyone to when the couple was able to move in.

"First I looked at the floor plans, then I went and met with Gina and Sean," said Classen. "We went out together and picked out finishes—I was with them for every meeting."

McKinless described Classen as "detail oriented" and said she helped her decide the right way to make use of space, right down to whether drawers or cabinets would be best.

"She also did some fantastic CAD drawings for us, and it helped put things into perspective," said McKinless.

Despite the amazing results of the bathrooms and laundry room—yes, they let me take a peek inside—everyone seems to think that the McKinless kitchen is the greatest result of the work put into the home.

"It's my favorite part," confessed McKinless. "I like the orientation and the openness of the room. I enjoyed the opportunity to configure things the way I wanted."

"I think the kitchen is the focal point of the house," Classen agreed.

The Holzer family's kitchen is one of those rooms that you really see no need to leave. There's space to enjoy a leisurely meal as a family, space for Whitney Holzer to cook—which she says is one of her favorite activities—and plenty of space to spare. Stewart Culler, a full-time designer at Carolina Kitchens, used her design chops to turn the slightly segregated room into an open meeting place for the Holzer family to enjoy. 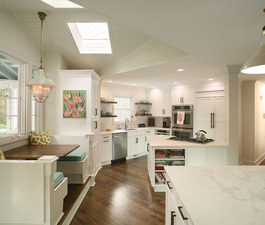 "We moved everything except the sink!" laughed Culler, who has designed kitchens and bathrooms for the last 12 years.

Culler described herself as being both a creative person and a mathematical person. She "stumbled into" cabinetry after graduating from the College of Charleston with a degree in Historic Preservation.

"I've been drawing houses since I was 5 years old," she said.

Carolina Kitchens, which is located off Clements Ferry Road near Daniel Island, specializes in any room of the house that needs storage, according to Culler. She describes the company as "cabinet people" and stressed that everything is made-to-order, from custom to semi-custom options.

The Holzer household is a recent project where Culler, who is one of the three full-time designers on board at Carolina Kitchens, was able to enjoy the challenges of opening up a tough space to make it attractive, functional and efficient.

"The kitchen was in the shape of a trapezoid," explained Culler.

Not being particularly visual, I requested photos and saw for myself how the old kitchen created a corner of sorts, which prevented Holzer from viewing the family room while she cooked in the kitchen.

Because Carolina Kitchens sticks to the theory that a designer should learn how a client uses a space, Culler spent ample time quizzing the Holzers on the use of their kitchen—and of their home in general.

"Stewart asked a lot of questions about our day-to-day life," said Holzer. "She asked about how often we entertain at our home, even whether we drink wine or cocktails."

After some thorough consultations, Culler and team got to work on designing a dream kitchen for the Holzers. The new kitchen includes two functional islands—one for preparing food and one for eating—plus a wet bar, more cabinets and a full pantry. Storage is no problem in the Holzers’ new kitchen, which, according to Whitney, was a priority.

"I cook a lot, so we had to figure out easy access to everything," she remarked. "And more pantry space was important."

Culler "played" with several different designs before she determined what would suit the Holzers best. The support column, which was part of the original kitchen, needed to stay in place, so another column was added for symmetry between the two islands.

"Removing the column would have compromised structural support," explained Culler.

The process of redoing the kitchen took about eight weeks. Appliances were switched out, the original side wall was torn down and the finished look is one where members of the Holzer family, and guests, can access the kitchen more readily as well as converse with the chef from the family area.

"This is definitely the heart of our house," mused Holzer. "We're in here all the time."

Culler expressed to me how important it is that the families enjoy their new spaces.

"I love it when a client calls me back after a gathering or a holiday meal and exclaims to me how much they love the new kitchen," she said with a grin.

"And I love what I do—how a 16th of an inch can make that much difference."

When Libby Harris walked into what would soon become her second home on the Isle of Palms, her first instinct was well-deserved skepticism. The place was falling apart, outdated and "just awful," according to the Charlotte, N.C. resident. 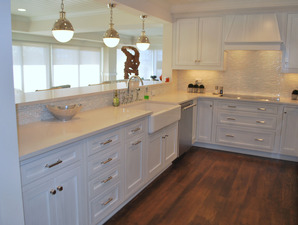 Perhaps you are wondering why, exactly, Harris would even attempt to deal with such a loathsome building. After all, there are many lovely homes in the Lowcountry, at the ready for a new owner. But Harris admitted that she "kept coming back to it," after viewing other properties. Something about the condo drew her in—maybe it was the promise that her contractor, Mark Canevazzi of Barrier Island Builders, would be able to utterly transform it, which he did.

Once Harris gave everyone the thumbs up to begin working on the condo, she was amazed at how much needed to be done all at once—and how she herself did not have to do any of the work.

"This has been one of the easiest projects I've ever encountered," she admitted. "It was completely hands-off for me."

To give you an idea of how comprehensive changing up this condo was, keep in mind that Harris did not want to retain one morsel of it, not even the ceilings. She described how everything was taken out and her current vacation home is "nothing like what she first saw."

The folks at Mevers Kitchen and Bath, a company based in Mount Pleasant, were happy to jump on board for Harris' kitchen, bath and laundry room makeovers. New cabinets, countertops, appliances and drawers now appear in the rooms—all designed by Heidi Walker, an interior designer.

"This has been my first time working with Mevers Kitchen and Bath," said Walker, who has designed for 20 years. "They've been easy to work with."

Walker said they decided to keep the same footprint in Harris' kitchen, but they installed all new cabinets, counters, fixtures and appliances. The countertops in the kitchen were redone in a material known as Frosty Carrina, a type of quartz that is nonporous and resistant to heat and scratching. It was perfect for the kitchen, which Walker designed specifically to be the hub of the home.

The master bathroom is the picture of luxury, with mosaic tile, a marble floor and a double-head shower. The two guest bathrooms, along with the laundry area, are environmentally friendly, each sporting countertops made from recycled materials.

"Mevers provided everything," said Walker. "From countertops to doorknobs."

Because Harris does not live in the Charleston area full time, keeping her abreast of the home's progress was important to the team. Walker and Mevers sent her email and photo updates constantly, and helped her make decisions for the good of the project. For example, Harris explained how she was considering knocking down one of the kitchen walls, but, after some consultation with Walker, she chose not to.

"Heidi designed a drawing with the wall absent so that I could see what it would look like," Harris said. "In the end, I kept the wall for cabinet storage."

Two more notable updates to the condo are the nooks Mevers helped Harris build for her beloved cat, Sheba. The cat now enjoys her own area for eating in the kitchen, as well as a private kitty litter area in the laundry room.

"It turned out really cute and Sheba loves it!" Harris raved.