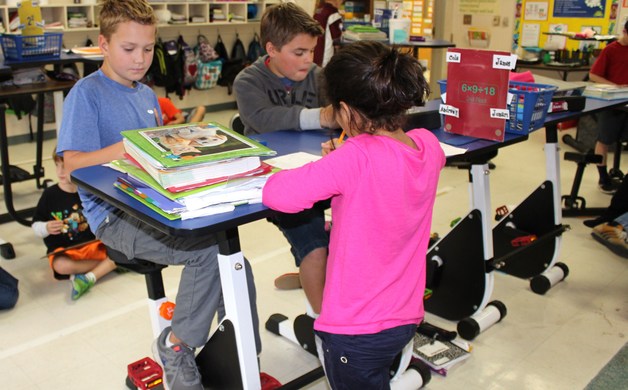 Stacy Shoecraft taught elementary school for years and was all-too-familiar with the effect that hours of sitting had on her young pupils. The squirming, the sleepy eyes, the drifting attention all conspired to indicate that there must be a better way.

“I remember what it’s like to be a kid, and you just need to move,” she says. “But our system doesn’t really work that way.”

Little did Shoecraft know that she was about to stumble upon a growing movement, one in which educators and medical experts are aligned in the belief that physical activity improves student performance on a wide variety of measures.

Among those individuals is John Ratey, whose book Spark tracks some interesting observations about learning while moving. His theory is that the brain constantly creates new brain cells, and physical activity helps preserve them. Ratey is among a growing chorus of advocates who believe education + exercise = real learning.

Meanwhile, medical experts note the lack of modern-day movement is leading to obesity and other diseases, earlier and earlier in life. Those observations have spurred more standing desks in offices (heard the theory that sitting is the new smoking?), gyms at the workplace, and a campaign to restore PE to every school.

Another local advocate is Ed Pinney, owner of KidsFit in Huger, whose mission has long been to incorporate movement into the classroom. Ed’s company has helped outfit numerous local schools with activity-based learning equipment, and he’s now found a fervent advocate in Shoecraft.

The fifth-grade Pinckney Elementary teacher works with kids at every learning level “including both gifted students and those who need a resource teacher,” and she says every one of them benefits from activity-based learning.

Shoecraft’s “a-ha” moment came over a year ago, as she noticed a number of her special needs students benefited greatly when they moved more. She brought an exercise bike into her classroom, and saw positive results. Around the same time, she attended a teacher’s seminar on the merits of kinesthetic learning, and met a local advocate who knew where to source the equipment.

“And I just one day thought, this is going to happen. We’re going to bring this equipment to our classroom,” says Shoecraft, adding: “We spend so much money trying to improve education, and this is something that works well. It just makes sense.”

And yet, there was no line item in the school district’s budget for classroom exercise equipment. Having spied a kinesthetic learning table she wanted to procure  (it mirrors the movements of bicycles, balance, a ski swing, cross lateralization and elliptical, all while seated), she knew she had to find about $3,900 per table. Somewhere.

Inspired by their own experience with the classroom bike, Shoecraft’s students organized themselves to raise awareness – and money. Voluntarily working together during lunch hours, the students brainstormed sources of funding and support.

“They approached it like a business. They brainstormed who to contact and how to do it,” she says. Their list was impressive. Student-written letters went out to the likes of Warren Buffet, Michelle Obama, Boeing representatives and MUSC. They filmed a video and shared a link in their letters.

And funds started coming in from parents, friends and others. Ultimately, Shoecraft outfitted her fifth-grade Pinckney Elementary classroom with 3 tables for about $10,000 (she notes locally owned KidFit gave them a break on the price).

And now she’s advocating for others to introduce the concept to their classrooms. Another Pinckney teacher has installed a table, and educators from other schools drop by frequently. Berkeley County schools have also made some inroads with classroom kinesthetic.

Armed with enthusiasm and energy, the teacher is trying to create a bigger movement around movement: “I want to see this in each classroom, school, district and throughout the nation,” she enthuses.

But does it all really work?

Shoecraft says her students have already registered measurable improvements on their academics. In just a few months (the tables were installed last April), she saw one strong student take her PASS tests while riding the table’s bike, and log a 70 point increase. Kids who’ve been diagnosed with attention issues have become more focused in the classroom.

A group from the College of Charleston will visit her class this Spring to collect data on the effects of the activity based learning.

No matter the data, Shoecraft is swayed: “As a teacher, I believe learning can be fun. It’s all about getting the kids engaged. And this does exactly that.”