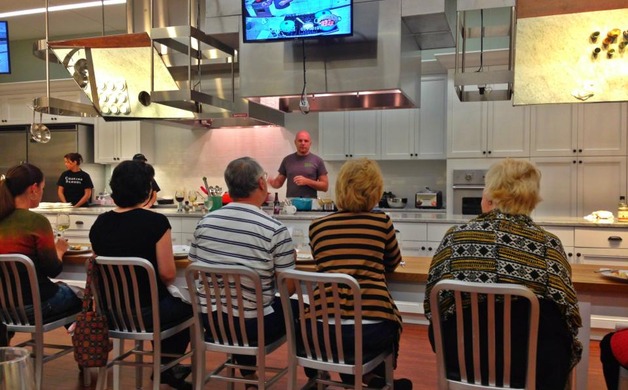 The sound begins, low and soft, at his lips and then rises, filling the room. It’s one syllable, “Om”, a sacred sound, drawn out across half a minute.

It calls the class to order, letting budding yogis know that it’s time to work their way up to a finale that will leave them feeling exhausted but blissful, glad of a good workout. “I always start class with breath awareness,” Immer says. “It's the key to the practice, and something that requires constant attention.”

Teaching yoga isn’t all Ken Immer does these days – far from it – but it’s close to his heart. Because yoga is a huge part of the path that made him the man he is today: chef, founder of graw foods, teacher, and a leader in the local healthy living scene.

Graw foods, a local business that has rapidly made its name known throughout the southeast, makes healthy foods from raw ingredients using techniques that release the natural flavors and nutritional value of the food. All of the seeds and nuts are soaked and sprouted to release micronutrients and wash away bitterness.

Their flagship product, gRAWnola, is sprouted raw granola in a variety of yummy flavors. “Graw foods is always working on something new,” he says. Right now that includes more recipes and flavors, graw crumbs gluten free magic mix & flour, videos, a cookbook, and an app for smart devices aimed at helping the health-conscious meet their goals. “We’ve also recently launched a new bulk product, graw seeds. These are sprouted pumpkin seeds and sunflower seeds flavored with herbs sourced from a local farm here in Charleston.”

Ken wasn’t always the go-to guru of good-for-you. Years ago, Ken was overweight and unhappy, working in the food-and-beverage industry. As soon as he finished a shift, he’d be out drinking and partying all hours of the night. He didn’t give much thought to his food choices in those days. As a result, he often felt tired and generally not well.

He’d seen other men - including men in his own family - suffer the consequences of weight problems and unhealthy living. So one day he made the decision to put on the brakes and turn his life around.

Yoga was the kind of exercise he chose and it ultimately helped him redefine his life. It wasn’t long before he was sufficiently advanced in his practice to take the plunge into training to train others.

Ken had a crisis of confidence during yoga teaching training, however, when he reached the part of the program in which prospective teachers are required to go on a vegetarian diet. He went from an initial reaction of “I can’t do this” to “Okay, I can do this just long enough to get through the program”.

The surprise came after he began the diet. Not only did he begin losing weight, he also felt significantly happier and more energetic.

These days, he teaches a men's only yoga class in Park Circle (Thursdays, 6:30 p.m.). “Yoga is for everyone,” he says. “We’re working to help make yoga a more gender-neutral experience. A lot of men have shied away from the practice because it’s been marketed towards women for many years. My classes are about athleticism. That really gets you connected to your body. A yoga class - for anyone - should leave the student feeling more connected and aware of their own body with a sense of calm and focus.”

He also shares the knowledge he’s gained about healthy eating as an adjunct instructor at The Culinary Institute of Charleston, teaching a Vegan & Vegetarian course. Wherever something interesting is happening with food in Charleston, there’s a good chance Ken will be there. Look for him at Charleston Cooks! and Southern Season in 2014. He even has a "Dinner & a Show" dine and learn program where he will come to your home and cook in your kitchen for a small group – a great education / entertainment idea for a dinner party.

He encourages those seeking to become more conscious about their food choices to shop at local farmers markets. Often, the very people who grow your food are there, available to answer questions.

“I get most of my personal food from local farmers who I know and trust,” he says. “We’re all in this together, and when we play our part in the bigger picture, we all can feel valuable and worthy, and live a comfortable life.” 843-225-2983, grawfoods.com