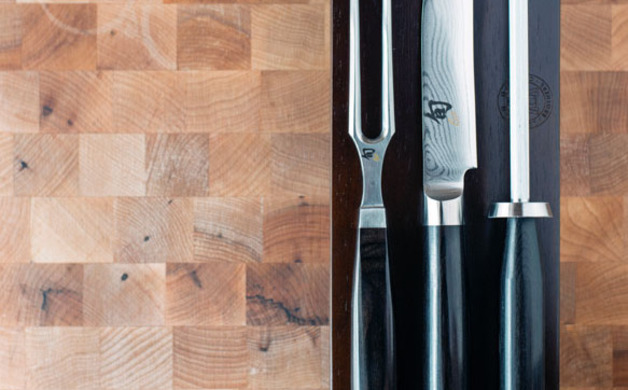 THE SPLENDOR of a perfectly cooked roast (see "Feast for a King" article) all but demands a skillfully wielded knife and a sense of ceremonyâ€•two things that are too often absent at many dinner tables these days. Fortunately, many home cooks are eager to become reacquainted with the largely abandoned art of tableside carving. They would do well to look to our European ancestors. A talented nobleman in France, Italy, England, or Germany during the Middle Ages considered it part of his duty as a gentleman to know how to carve a roast in front of his dinner guests. The carving itself was an exhibition in which precision and speed were closely observed and judged. Woe to the cook who hacked and lost too much of the roast's juices!

Today, carving involves little more than serving equally proportioned slices, which diners are left to cut with their own knives and forks. But early carvers had to present each guest with small, carefully cut pieces that could be picked up easily with a knife tip or the fingers, since forks were not widely used until the late 18th century. Alternatives in the tools of the trade developed over the years. (Pictured at right is a Shun fine cutlery set, manufactured in Seki City, Japan, since the 13th century). In the 16th and 17th centuries, two styles of carving knives were commonly used. One featured a sharp, curved blade that could be inserted between joints and ribs to sever them; another had a straight, parallel-sided blade more suited to slicing. In England, where the rituals of carving have been clung to with particular dedication over the centuries, a two-tined carving fork was usually used for holding the meat in place, but the actual serving of the carved pieces was traditionally accomplished with a knifeâ€•a cook either pierced the carved meat with the point of the blade or slid it onto the diner's plate by means of a broad-bladed tool known as a presentoir.

Carving was commonly considered to be a man's job until at least the 16th century, when it was finally considered appropriate for the lady of the house to do the honors. Three centuries later, however, new trends intruded on traditionsâ€•carving and portioning the meat in the kitchen, out of the sight of dinersâ€•caught on quickly, presaging the downfall of carving as a widely practiced craft. By the mid-20th century, informality at the table had become the rule, and tableside carving was largely relegated to the hands of restaurant professionals. I say it's time to grasp fork and blade and reclaim the distinguished art. â€•Darra Lukas