Posted In Charleston Living Magazine March-April 2014, Travel
It’s every child’s dream, but before you go, take advantage of expert advice to get the most out of the Magic Kingdom. 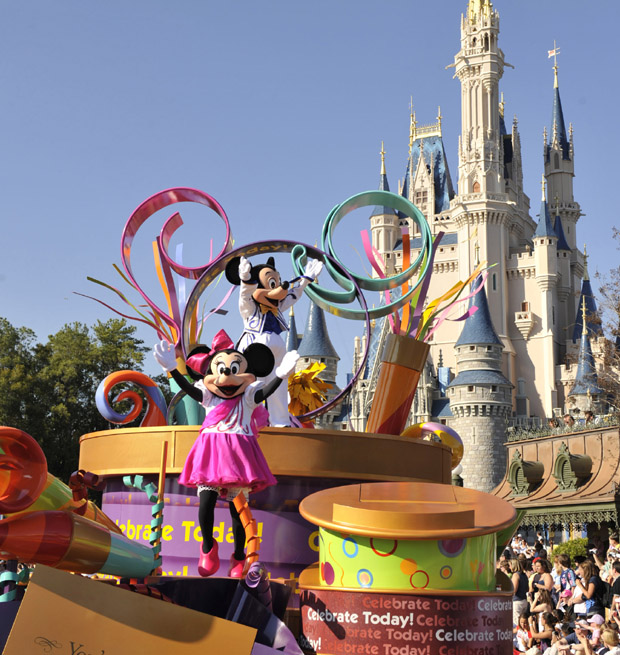 Like most couples with school-aged children, Kristy and Jack Ellenberg need to plan their vacations well ahead of time. But not always. Case in point: their most recent trip to Disney World. “It was the weekend before fall break, and Jack and I decided, totally spur-of-the-moment, to take the children to Disney,” laughs Kristy. Instead of getting online, though, and wading through the Disney website, Kristy made a phone call to her friend Margaret Bauer, who, along with her sister, Daisy Miller, owns and operates Forest Lake Travel. “I said, ‘Margaret, is it crazy to think about going to Disney in four days?’ She cracked up, but then she got really excited about it and started asking me what we wanted to do, how long we wanted to stay and how much we wanted to spend. By the end of the conversation, we’d planned every day, including dinner reservations, tickets to the Not-So-Scary Halloween party and finding an easy place for us to meet up with Jack, who would be flying in from a meeting in Denver. All I had to do was pack.”

It may be every child’s dream to visit Disney World, but for many parents, planning that trip can be a logistical nightmare. It’s easy to see why. The Disney World entertainment complex includes 35 hotels, six parks and four golf courses within its nearly 40 square miles. Add new attractions, vacation packages, endless food choices and ticketed special events to the mix, and suddenly even the savviest parents can feel like they’ve fallen down a rabbit hole. “We’ve been to Disney before, but this was the first time we had help,” says Kristy. “It made a huge difference. Margaret knew what was new and was honest about what was worth our time. She also helped us fit things together logically so we weren’t running from one end of the park to the other. We were really able to focus on the fun and not the planning.” Kristy also appreciated that Margaret had noted on the family’s reservation that Larrabee would be celebrating her birthday during the trip. “When we arrived they gave her a birthday button. Everywhere we went, cast members wished her a happy birthday,” says Kristy. “She felt like a princess!”

For Margaret, those special moments are why she loves Disney. “Not only do I adore Disney myself, but I think it’s a fabulous place for a family vacation.” She should know. For the past few years, Margaret, along with her coworker Shelley Bohlman, has worked as an Authorized Disney Vacation Planner. “Years ago Disney was easy to navigate,” says Shelley. “Not any more. Since you can pre-register for almost everything, making all those decisions can get complicated very quickly. Since we know Disney, we can guide you from the time you leave your house until you get home. It’s a real time-saver there is no additional cost for Disney planning.” As an Authorized Disney Vacation Planner, Forest Lake Travel has access to money-saving specials before they are offered to the general public. “Once I have your dates, I can call and find out what kinds of specials they have during that time,” explains Shelley. “And if a special comes up after you’ve made your reservation and it is available, we can usually rework it to include the new offers.”

To become authorized planners, Margaret and Shelley as well as several other advisors at Forest Lake Travel completed a series of courses through the College of Disney Knowledge that familiarized them with the parks, their offerings, lodging options, transportation and dining. Once they’d completed their training, they joined a cadre of planners around the world who are among the first to know about new programs, attractions and packages. Even better, taking regular Disney cruises and making visits to the parks mean they’re loaded with tips, tricks and advice that come either from on-the-ground experience or too many hours on the internet reading Disney vacation blogs. Take, for instance, dinner in Cinderella’s castle, one of the most popular events in the Magic Kingdom. “It’s a wonderful experience, but it’s also very expensive and can be hard to reserve,” says Shelley. “I’ve sent a lot of clients instead to the Princess Dinner at the Akershus Royal Banquet Hall in Epcot. It’s more intimate and there are always several princesses around to talk to the children. They’ve got time for photos and autographs, too.” Daisy Miller, who recently took her daughter Madge to Akershus, agrees. “Madge’s eyes were huge when one of the characters leaned down to whisper a princess secret in her ear. She was absolutely thrilled.”

Shelley Dempsey discovered the benefits of working with Shelley Bohlman and Forest Lake Travel almost by accident. “I mentioned to Daisy one day how much Scott and I wanted to take the boys back to Disney, but that it was just too overwhelming to plan,” she recalls. “When she explained all they can do for us at no additional cost, I called Shelley Bohlman immediately.” One of the first things Shelley did was help the Dempseys make the most of the money they’d budgeted—so much so that they were able to extend their trip from four days to seven. “I thought we’d need a top dollar hotel,” says Shelley Dempsey. “But when we explained that we spend very little time in the room, Shelley suggested we book a less expensive hotel that had particularly boy-friendly amenities and use the money we saved elsewhere.” Shelley Dempsey hadn’t considered purchasing Disney’s dining plan, but when Shelley Bohlman explained it to her, she was sold. “She planned out each day to include diningand we never had to run from one end of the park to the other,” she says. “Everything was perfectly organized, down to which restaurants had the best breakfast, lunch or dinner and a note in our file alerting staff to my son’s food allergies. At every restaurant someone walked us through the menu or the buffet line and explained what he could or couldn’t have. The whole week was incredible and I’d go again tomorrow—but only after I’d called Shelley!”

Considering a trip to Disney? Here are just a few tips. If your children are young, you’ll probably only need to plan for half a day at Disney’s Hollywood Studios. “They’ve got a great preschool component, but the park is mostly geared toward older kids,” says Shelley.

If you’ve registered for a nighttime event at the park, be sure to pick up a special armband when you arrive that day. It will allow you to play in the park between the time that it closes to the public and the event begins.

Magic Bands are bracelets which store each guest’s room key, park tickets, meal plan and other information. Wear one, and you don’t need to carry a wallet or keep track of your room key. They’re still in the testing phase, but Forest Lake Travel clients have access to this new technology before it’s available to the public.