Sometimes you have to wade chest-deep in the river before you see the light. 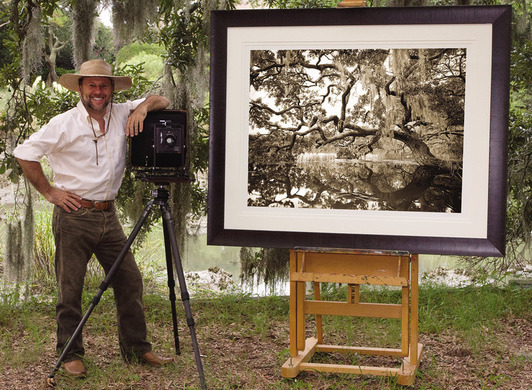 Picture day breaking through the limbs of live oaks, but don’t go halfway with your imagination. Is the sky clear or are clouds stacked up behind the scene? Are the marsh grasses swaying? Can you feel the warm water lap against you? Try to see, really see, right down to the way the shadows play across the bark of the trees and through the curls of Spanish moss.

Draw the picture closer. Do the details become crisper and clearer, warmer and richer? Do you feel like you could step inside the scene, feel the sunlight soothe your skin?
This is the world Ben Ham has known since earliest childhood: Southern creeks and marshes filled with scenes of staggering beauty. Inspired by the works of landscape greats like Ansel Adams, he learned how to transcend the simple act of photography and create fine art. Today, he counts himself blessed to have found a way to make his living by sharing the beauty he finds in nature with others.

Watch Ben at work with his camera in the field and the word ‘painter’ may well come to mind. He’ll explore a landscape slowly, meticulously, even meditatively, before he ever sets the tool of his trade, a K.B. Canham 8x10 light weight field camera, on a tripod. He works with film in the traditional way, meaning that the bulk of his time is spent in setting up each shot precisely. He’ll expose one or two sheets of film and that’s that. If his total take is 8 or 10 photos, it’s a big day for him.

“That’s the magic of it,” he says. No rapid-fire bursts of shutter releases, no sneaking a peek at the back of a digital camera to make sure. The joy of discovery is reserved for the darkroom, when the image emerges, and he wouldn’t have it any other way.
He handles every aspect of production, from printing to the building of the frame, in-house at his studio/gallery in Hilton Head, using a combination of traditional and modern techniques to maintain precise control over the look and feel of the art. The completed works are large pieces, most of them black and white toned to sepia. The quality that goes into the presentation of each piece is staggering, from the paper, 100-percent acid-free cotton rag with just the finest touch of sheen, to the museum glass glazing and distressed frame.

Responses he’s received on his work range from the sense of being frozen in time to feeling like one could walk straight into the finished work and enter another world. “I’m trying to evoke an emotion. There are different interpretations and none are right or wrong.”

While much of his work involves his home, the South Carolina Lowcountry, he is also a dedicated explorer who has ventured twelve thousand feet above sea level in the Rocky Mountains, trudging through deep snow pack, to situate himself on a ridge for the perfect shot. He has wandered through the hauntingly beautiful canyons of the Southwest desert and stood on the shore of the Pacific in the quiet hours when the sun is low in the sky scouting for scenes that quietly speak to him. In all of these places, he has maintained his same serene, contemplative method, using the slow capture of large format film photography and a masterful understanding of tonality to achieve a look that is simply astonishing.

Ben’s work, exclusively available as limited edition fine art pieces, has been collected all around the world. His art adds a deep sense of serenity and elegance to facilities as varied as the Center for the Families of the Fallen at Dover Air Force Base and the Silver Oak Vineyards of Napa Valley and is shown locally in the Martin Gallery at 18 Broad Street.
Ask Ben for the secret of his success and he’ll say that a good bit of it involves his lifelong love of the great outdoors. He wouldn’t be able to do what he does without feeling right at home on rivers, marshes, and mountaintops. Accordingly, he is an avid bicyclist and boater. Any given day will find him either riding the roads on his Kestrel or disappearing into winding creeks.

“I’m really fortunate to be able to do what I do,” he says. “I’m able to make my living as a full-time fine art photographer. There aren’t a lot of us out there.”
If there’s anything he wishes for, it would be more time to actually be outdoors, doing what he loves best in the places that make him feel most alive. It’s the circle that connects him to those long-ago days when he was a boy exploring the waterways in a small aluminum boat – fishing, shrimping, and marveling at the world around him.
Those childhood days taught him a basic lesson from which he’s crafted his path through life.

And the bare bones of the lesson are actually quite simple: “Stop and look at things,” he explains. “Look at light, how it plays on everything. Look out the window during the day. Start seeing the things that have been there all along but you’ve never really seen before.”