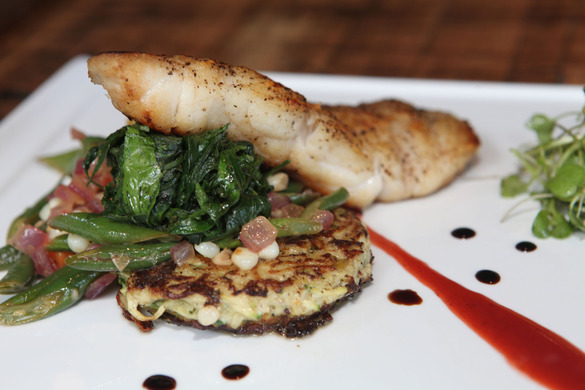 When someone like Bravo's Top Chef Masters host Curtis Stone shows up at your place for a bite to eat, you know you're doing something right. In Charleston recently for a special event, the celebrity chef from Down Under was reportedly directed downtown to Burwell's Stone Fire Grill when he asked “what's good?”

The toney eatery is serving up a “next generation” version of classic steakhouse fare in a space on lower Market Street bordering the docks. In less than a year since opening, the restaurant has quickly become popular among the downtown dining-around set, and is a favorite watering hole of a few local celebrity chefs as well.

“The concept of the steakhouse – big, beefy, masculine – hasn't changed in 100 years,” notes Burwell's partner Ken Emery, who specializes in restaurant design. “We wanted to modernize it, and to have more menu offerings for lighter appetites than just a filet.”

Emery teamed up with North Carolina-based John Thomas, a corporate restaurant executive, back in 2011 to bring this vision to life. They searched the Southeast for a site, and decided Charleston – with its reputation as a culinary town – was a perfect fit.

“We also believed that the Market district is Charleston,” recalls Thomas, “and that it would be exciting to do something in the Market.”

They found two adjacent buildings – 14 and 16 North Market – and broke through walls to combine the properties into one, 5,600 square foot space.

“During the demolition we found old wood under the drywall dating back to 1894,” says Emery. “We wanted to preserve everything that we could – that's why the floors don't match. We also resisted putting in an elevator and refurbished the original stairs.”

Executive Chef Eric Huff was brought on board during the build-out phase and spent as much time wielding a sledgehammer as writing the menu.

“I stained every beam on the second floor,” says Huff, who'd worked under Cirian Duffy, former executive chef at Tristan. “I helped pick out booths, watched it grow from the ground up. We all put a lot of  blood, sweat, and tears into it.”

Emery notes that the vision for the interior was a radical departure from steakhouse form: creating a variety of spaces – open dining room, exhibition kitchen, bar with TV, and an intimate second floor – tailored to differing dining experiences.

“It's a 'see and be seen' venue, something that's a big trend today with the rise of social media. We designed the space to have defined, yet visually open areas.”

The exhibition kitchen is a focal point for diners who want to get in on the action.  Bar-style seating provides front row views of the kitchen– the non-stop intensity of the chefs, the line, and servers.

A spacious, open floor plan dining room with several oversized windows on Market Street feels expansive and cozy at the same time. Rich banquettes lining the walls surround  additional tables – all providing views both inside the restaurant and out – the historic U.S. Customs House across the boulevard makes a striking visual.

The generous bar exudes a warm, neighborhood vibe with an overhead monitor for sports fans. Nearby, a wine cellar doubles as a lounge with comfortable, chat-inducing seating arrangements. Surrounding woodwork is original cypress dating to 1894. The bar top is reclaimed flooring salvaged from century-old railroad cars found by Charleston-based Reclaimed Designworks.

The second floor loft blends modern design with reclaimed structure: rustic beams and beadboard frame bright patterns on the banquettes. Perched at the edge of the room in a pocket overlooking the lower level, a single table for two offers privacy for a special evening, while, at the same time, showcasing the event.

“Creating a yin and yang was the goal,” recalls Emery of the business plan. “We wanted a mix of old world and new, pockets and open space. It has the energy of opposites.”

And if you haven't been to Burwell's since they opened the rooftop bar—go! Battling bartenders, edgy shipyard views, and a patio decked out in sleek, lounge-y seating covered in eye-popping red are shaking it up for the cocktail crowd.

The menu surprises with unconventional preparations of steak house classics like a deconstructed Caesar salad featuring a bed of whole baby romaine leaves, crisp salmon skins, olive tapenade, and a lightly fried quail egg. Seared scallops are taken to a new level with a bacon-y chunk of crisp pork belly.

Research directed the team toward leaner, cleaner cuts of beef. “People are trending away from big steaks with no sides,” says Emery. “We looked for a lot of unique cuts and created some of our own, like the bistro and the Wagyu New York strip medallion.”

“We have a chef's special every evening,” notes Emery, “that might be either a local seasonal fish

or somewhat exotic protein—kangaroo, bison—whatever chef's interested in at the moment. It's an opportunity to do something fun and different.

Probably the most radical of Burwell's approaches is a 700 degree lava stone that is brought to the dinner table for searing your own steak. The wait staff is well-versed in the exciting cooking technique and provides guidance and assistance if necessary.

“That's part of the excitement – it's different,” muses Emery. “That's been our goal, not to compete, we love Charleston and want to get along with everyone. If you're looking for something different, we're here...and it's been a pleasure introducing the next generation of the steakhouse.”