Chef Jon Cropf is all about serving fresh and sustainable seafood 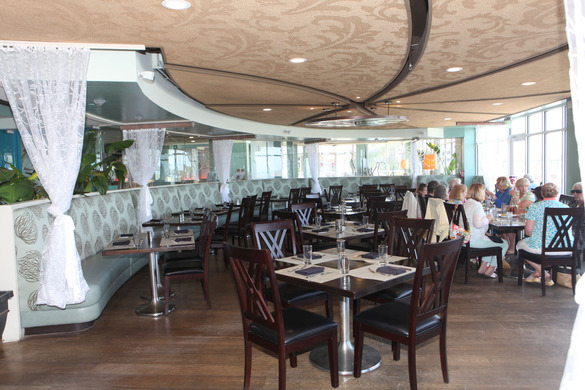 I once caught a fish in my mother's backyard — a small bass, the first and only fish I've ever reeled in with a fishing pole. While I never ate the fish myself (I was too squeamish for that), I remember feeling proud and awestruck when my stepfather pan-seared my catch and enjoyed it for dinner.

When a meal comes straight to you from its origins without a middleman, there's an appreciation for the food that cannot be matched by a trip to the supermarket. Executive Chef Jon Cropf, of Blu Restaurant on Folly Beach, understands this phenomenon and, thus, only the freshest food will do in his kitchen. In fact, I don't think he would mind me saying he is a bit of a stickler about it.

Cropf grew up in Baltimore, where he worked his way up from his job as a dishwasher at a nearby country club. He was promoted to line cook, but he wasn’t satisfied; he realized a culinary degree would be his next step. So, after seven years at the restaurant, Cropf moved to Charlotte, N.C., to attend Johnson & Wales University.

"Though I enjoyed city life — growing up in Baltimore and going to school in Charlotte — I was eventually ready for something different," says Cropf. "So, after school, my girlfriend and I moved out to Lake Tahoe, which is the most beautiful place I've ever been."

Before all our readers wrinkle their nose in disdain at the idea of someone not thinking Charleston is the most beautiful place on Earth, understand that Cropf had his culinary "coming of age" in Tahoe, where he worked at the Tahoe Mountain Club with "an incredible" sous-chef and executive chef.

"They changed my approach to cooking and my view on farming," declares Cropf. "Instead of using all the spices, marinades and rubs that I was accustomed to using, we let the ingredients speak for themselves."

Cropf was promoted to sous-chef after six months at the Tahoe club. He was then responsible for two restaurants — one at the top of the mountain and one at the bottom.

"I basically had to guide the food between the two locations, up and down the mountain," he says. "It was ironic: A couple of years before that, I'd been taking a bus to work in a city. Now I was on a Snowcat."

Eventually, though Cropf describes himself as essentially a "mountain person," the Deep South called him and his girlfriend back to the Lowcountry area, which happens to be her home.

"The scenery was beautiful in Tahoe, but it was good to be back in the South. I enjoy the hospitality here," he says.

Luckily for everyone on Folly Beach, Cropf ended up at the Tides Hotel as a chef for Blu — a restaurant that, at the time, was being reinvented.

"I wanted something that was not yet established," he says. "I wanted to define the vision of this place, which I have. I started as sous-chef."

Since Cropf also confesses to being an avid fisherman, becoming a chef in Charleston, particularly during the culinary renaissance we are experiencing, is the perfect complement to his passion for seafood.

"In Tahoe, I mainly dealt with game animals, chicken and beef," he says. "I like the opportunity to work with seafood here at Blu. We do have a chicken option and a steak option, but most of the menu is seafood."

As far as which habits Cropf carried with him from his time in Tahoe, the "pristine vegetables" on Blu's menu are the answer. The restaurant maintains a friendly relationship with area farms, including Geechie Boy Mill, Ambrose Farms and GrowFood.

"Some of the best farmers I've ever worked with are in Charleston," he admits. "I also love how South Carolina's growing season is so long. It's mild all year round, which means you can always find beautiful stuff."

"What's your favorite vegetable?" I ask him.

"That's a tough question," he replies. "I'm super passionate about strawberries when their season first begins. Then I love Romano beans and doing different things with those. My favorite vegetable to eat is a fresh tomato. Just on a plate, by itself, with sea salt. I've always enjoyed tomatoes, but the ones we get here in the summer are the best."

And it isn't only the vegetables that were picked that day; the restaurant is one of the only two in the Charleston area to use live fish. Swimming Rock Farm, owned by Rick Eager, is an eco-friendly and sustainable environment for raising fish such as red drum and bass.

"It's more sustainable than harvesting wild fish," explains Cropf. "They deliver the fish to us still alive in the morning, which I believe gives my staff an appreciation and a respect for the ingredient."

Naturally, when a restaurant is that diligent about a fresh product, it seldom is without accolades. Blu is a member of the Sustainable Seafood Initiative — and they've been platinum, the highest award, for several years. Cropf also points out that more and more restaurants in the Lowcountry are joining the elite list.

"It's good to see that other restaurants are concentrating on the environment. The list they send us gets longer every month — it almost doubles," he remarks. "And it's not an easy list to join! They come in, rummage through your fish bins, call up your purveyors and check up on you." He laughs. "It's tough to get certified."

"Our menu changes regularly, about four to five times per year," he says. "I think everything on it is something we're all proud of as a team. I love the butter lettuce salad. The taste difference between fresh, local lettuce and imported lettuce is amazing. I also love the catfish, with Carolina Gold rice on the side."

Cropf's team members bring out the local tomato and cucumber salad for me. It has house-pulled mozzarella, fresh herbs and croutons. It tastes like summer on a plate, and even the guy down the bar notices how colorful it is and asks what I'm eating. I can hardly answer, of course, because my mouth is full.

The next course is Blu's shrimp n' grits, with local grits, provided by the Geechie Boy Mill, and local shrimp. The texture is so smooth and creamy, it's almost an emotional experience, that is, until they bring out the pan-roasted grouper, and I'm seriously overwhelmed with delight.

"These carrots were just picked this morning," they tell me, setting down my plate.

I've always said that with food this good, you almost don't want anyone else around while you're eating. It seems like a personal act, savoring every bite. Thus, I ignore the Saturday bar crowd and concentrate on the delicate snap of vegetables. It isn't difficult.

Afterward, Cropf and I discuss the culinary trends in the Lowcountry.

"I think using local ingredients will continue to be a trend," he says. "It's awesome to see companies such as GrowFood who are helping to distribute from the smallest farms — farms who couldn't do it on their own otherwise."

I ask Cropf whether the recent alcohol ban on Folly Beach has helped the restaurant or hurt it, in terms of business.

"It has definitely helped," he says. "For one thing, it brings people who want to have a drink onto our deck. It's also calmer overall on the beach."

Cropf's own life outside of the restaurant world is a calm one. He prefers to spend quiet time at home with his girlfriend, Stephanie, as well as their dog, Grace.

"I'm more into simple things," he says. "I enjoy gardening at home, taking our dog to the county park, things like that."

Though Cropf loves his profession as a chef, he believes that the source of the food, a repetitive theme throughout our conversation, should be praised as the heart of any meal.

"This is the best team I've been part of, all the way out to the purveyors," he insists. "The people who bring things from the earth are responsible for what restaurants are."