From the Mountains to the Sea

We sit down with the world famous Guy Harvey to chat about his current exhibit in Charleston, and delve into his philanthropic efforts in South Carolina 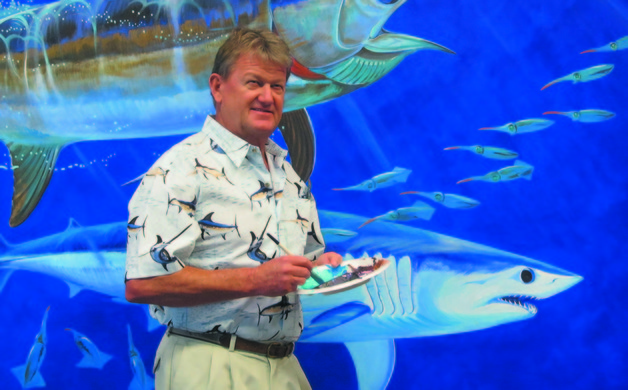 At first glance, it appears that South Carolina and Jamaica have very little in common. Separated by over 1,100 mostly wet miles, the Palmetto State and the Caribbean’s third largest country are about as similar as a house cat and a lion. While sharing a common ancestry, by and large they separated from each other at some distant point in history before morphing into their own distinct and unique form.

However, South Carolina and Jamaica are still connected in at least one way – they share a similar geographical makeup that includes a mountainous interior that gradually gives way to diverse coastal plains. Jamaica, in particular, is known for its combination of lush, “jungle-esque” mountains and miles of beautiful coastline. It was here that Guy Harvey, another link between these two regions, was born into a family whose ancestors had migrated to the southwestern part of the island in 1664 after being granted a large swath of land for farming.

As a youth, Harvey split time between his family’s cattle farm in the foothills of Westmoreland Parish and the coastal region to the south, catching mountain mullet in Sweet River and blue marlin off the coast. Growing up in these dual environments, Harvey developed an appreciation for each – and an understanding that these are interconnected, not distinct, ecosystems.

Years later, after building a successful brand, traveling the world and leaving his birthplace for nearby Grand Cayman, Harvey eventually expanded his business and philanthropic activities into South Carolina where he discovered that – like in his native Jamaica – everything is interconnected, from the mountains to the sea.

Charleston Living recently caught up with Harvey for an interview at his world headquarters in Ft. Lauderdale to discuss how he became so entrenched in the Palmetto State, and to learn what we can expect to see from him in the near future.

CL: Guy, you have a brand that is recognized throughout the world, and you travel the globe on various scientific and fishing expeditions. How did you end up with such a deep connection to South Carolina, particularly the Charleston area?

GH: Well, that was mostly dictated by the fans!  South Carolina is a very big market for Guy Harvey Inc. After several visits to the state in support of the retail efforts, I realized that South Carolina has a very active recreational fishing community that is deeply concerned with conservation efforts. This eventually led to the idea that my business and Guy Harvey Ocean Foundation ("GHOF")  should support some of these projects. We identified several that were aligned with the mission of my foundation, and then we partnered with Palmetto Moon on the sale of a custom shirt. Proceeds from these shirts were donated to CCA’s Topwater Action Campaign and the South Carolina Aquarium’s Sea Turtle Rescue Program. The fans seemed to appreciate the connection between the art and conservation efforts – and both of the projects we helped fund had proven to be very successful – so the foundation looked for a way to have an even bigger impact with these groups as well as some others we knew of in the area.

CL: To that point, in October you made a big announcement alongside the South Carolina Education Lottery about contributions you made to several South Carolina organizations. How did this partnership come about?

GH: In the summer of 2013, the GHOF partnered with the Lottery on a scratch-off ticket game featuring my artwork. This deal was based on a very successful scratch-off game we did the year before with the Florida Lottery – a game that ultimately sold 12 million tickets in just a few months’ time. In the Florida deal, I donated my entire licensing fee to the GHOF and pledged to spend every dollar in the state of Florida on marine science, education and outreach programs. It was very successful, so we took this proven formula and partnered with South Carolina. The Lottery printed 5 million tickets, and in October we announced that due to the success of the game the GHOF was able to donate over $226,000 from South Carolina Lottery proceeds to various organizations to benefit marine conservation and education in the state.

CL: What type of conservation efforts did you support?

GH: We donated funds to four organizations – South Carolina CCA, the South Carolina Aquarium, the Harry Hampton Wildlife Fund, and the Dolphinfish Research Program. Although three of these four organizations are based in Charleston, the scope of their collective conservation work and outreach programs benefit the entire state. For instance, the CCA is building and restoring both inshore and offshore fish habitats that will benefit all saltwater anglers. Also, the Aquarium’s student outreach program educates about 100,000 school kids each year from all over the state – many of whom have never seen the ocean or estuaries that are right here in their own backyard.  And, some of the work we funded, like Don Hammond’s dolphinfish tagging project, has implications well beyond the state.

GH: These tagging studies are extremely important because fish don’t know live within imaginary lines on a map. In order to develop comprehensive plans for managing specific fisheries, we have to have sound scientific data for a number of issues, such as where these fish live or when and where they migrate to for feeding or breeding. In the case of dolphinfish, Don’s research has shown that they travel thousands of miles in a very short time and can cross a number of international boundaries during those travels. For instance, dolphinfish tagged just offshore in South Carolina have been found in waters off Puerto Rico, Venezuela and beyond. Don is recognized as one of the leading experts in the world in the study of these game fish – which are a favorite among recreational anglers – and his operation is based right here in Charleston.

CL: You seem to have developed a strong relationship with the South Carolina Aquarium. In addition to donating the lottery funds, you also opened a new exhibit there in January.

GH: Yes, the Aquarium has developed into a very successful partnership. The Aquarium’s various programs and initiatives are very much in line with the mission of my foundation. We are both focused on providing marine education and outreach programs to the community as well as to bringing more awareness to conservation issues. One of the Aquarium projects that are being funded with the Lottery proceeds is the ‘Shark Shallows’ exhibit that will open later this spring. Not only will this provide a fun, educational experience, but it will also serve as a hands-on teaching tool to highlight the critical state of many shark species. So, Aquarium visitors will be able to have fun and learn something at the same time.

CL: So, how does the art exhibit fit in with the other components of the partnership?

GH: The art exhibit actually developed independently of the Lottery initiative. However, it’s really an extension of the other programs in that it’s another tool for raising awareness of critical conservation issues. In this case, my art exhibit mirrors the Aquarium’s theme of “From the Mountains to the Sea”. The artwork we are showcasing there focuses on the wildlife found in South Carolina, from the mountain and sandhill regions in the upper state down through the coastal plains and Sea Islands, then offshore. So, there is a nice mix of artwork in the exhibit, though it does tend to favor the inshore and offshore species a bit more.

CL: Sounds a bit like your childhood in Jamaica. You grew up in the hills off the coast but spent as much time as you could fishing offshore, right?

GH: Exactly. That’s one of the things that really resonated with me when we began this partnership – the way the Aquarium’s exhibits reminded me of my years in Jamaica where I spent time in both the hilly interior of the island as well as on the coast. You learn quickly that all of these different ecosystems are not separate – they are all connected and the health of one directly impacts the other. The Aquarium’s own exhibits show that connection in South Carolina, and we wanted to replicate that in the artwork we put on display. The overall purpose is to show not just the diversity of wildlife in the state, but also how it’s all connected and in a way interdependent.

CL: Which species are featured in the exhibit?

GH: I won’t tell you which ones – you have to see the exhibit yourself to find out!